Looking forward to seeing you in Larnaka, Cyprus!

Larnaka, founded in the 14th century BC by Mycenaean Greeks, encloses an uninterrupted history of centuries. During antiquity, it had been an important commercial centre of copper while it was later used as a fort by the Phoenicians. The modern city is built on the ruins of the ancient city of Kition, between the two largest cities in Cyprus, Nicosia and Limassol. Counting a population of about 144.370 inhabitants, Larnaka is the easternmost part of the European Union.

One of the must visits in Larnaka is Foinikoudes (13km from the venue), which is considered to be the prime tourist attraction of Larnaka. Apart from the beach, which is in line with the European standards, the region is famous for its cafes, restaurants and bars that are full of life, especially during Spring to late Autumn, when the weather is warm. Furthermore, the main market of the city is located behind the promenade, rendering the place as the centre of Larnaka.

Larnaka carries on a long heritage that emerges through the archaeological monuments, churches and other landmarks. Finally, the evolution of Larnaka arts, sports, music, cuisine and other sectors is indeed remarkable.

The venue for womENcourage 2022 will be the campus of the University of Central Lancashire, Cyprus (UCLan Cyprus). Find out more and take a virtual tour of the campus here. 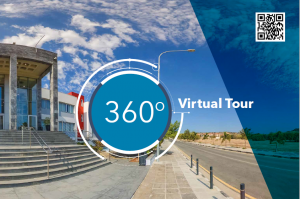 Book your stay in the modern student housing of UCLan Cyprus.